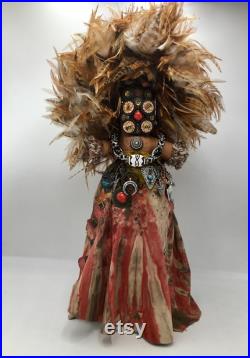 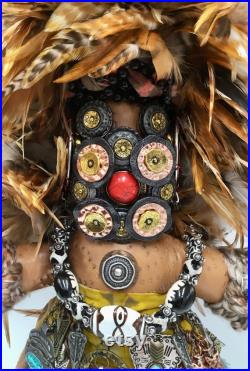 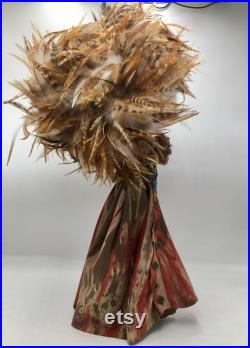 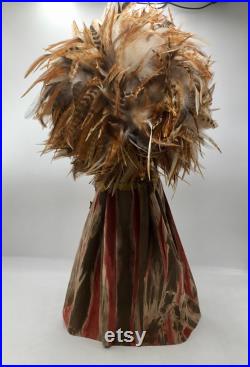 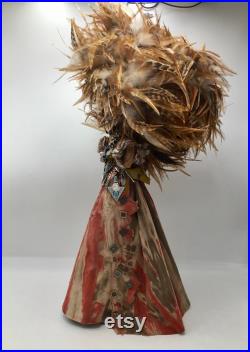 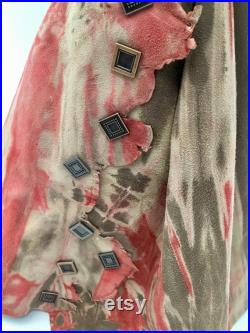 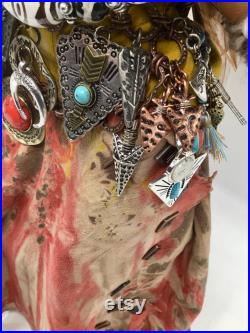 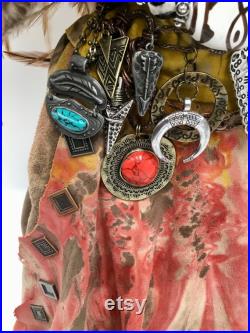 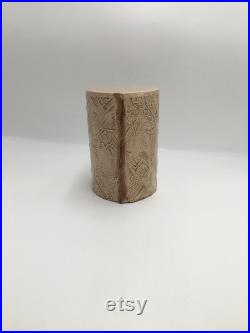 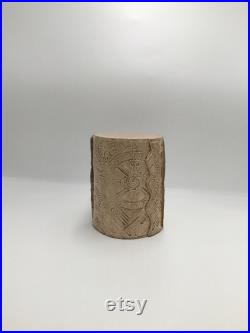 Mardi gras mischief celebration spirit shaman’s harvest. This special one of a kind creation has been named after one of my favorite bands to celebrate them shaman’s harvest. I think of them immediately when i look at this one her spirit is with them. Unique one of a kind mardi gras mischief creation created from arashi shibori leather. Leather used for her body is italian leather. The skirt leather is truly one of a kind piece very soft in stunning color. Leather is woven in and out of the mardi gras bead headband. Her button collage face is unique designed from layers of buttons and metal components. Her necklace is fashioned from stone, glass, and metal beads. Her waist has been accented a with metal tribal accents. She stands on a custom made ceramic base. The hair is fashioned from red striped rooster feathers. Newest addition to the mardi gras mischief series. Signature & date appear on the rear leg. Approximately 24 inches tall on custom ceramic base. Visit the artist facebook page listed below to view video of the gallery pre-katrina as featured by new orleans own frank davis. Inspiration for this tribal creation was definitely the rare find of the arashi shibori leather i located for her skirt. This is the only creation that will be made using it. Very exotic, soft and tribal. After completing this creation she just kept reminding me of my favorite rock band shaman’s harvest. I have walked past her time and time again and she screams shaman’s harvest at me so she is now renamed in celebration of them. Keep on rockin’ shaman’s harvest. The description of my creations that was made famous by new orleans own queen of talk, my friend andre trevigne comes to mind with this piece. Now these ain’t ya mama’s barbie dolls. These are what barbie would look like after spending a week on bourbon street that statement by andre seems to hold true in this piece, she’s very glitzy and parts of her skirt seem to be blowing in the wind i also braided and tied her hair in place which is uniquely different from my normal process. I hope she will bring some smiles. Please visit my facebook page to see the evolution of this creation as i show it from beginning to end in the creation process. Louisiana artist connie born, artfully captures the spirit of louisiana in her fun and exciting creations. Mischief creations are handcrafted of carefully selected fabrics and topped off with fanciful hair. They are dressed in skirts and necklaces made of mardi gras beads. Skirts, necklaces and head dress bands area all handcrafted from original patterns designed by the artist using straight lines of mardi gras beads manipulated into various patterns. Each creation is given a unique personality by the buttons that make up their faces. Faces designed on 24″ and 48″ creations are comprised of layers and layers of button collage. Chili peppers, crawfish, alligators, hot sauce bottles and other symbols indicative of the area are used as accent pieces on many creations. Some of the more unique creations feature real coffee beans, red beans and rice, along with swamp creations that sport real alligator heads used as part of the headdress. Each one-of-a-kind creation represents louisiana’s richly diverse and fascinating culture. Each creation is signed and dated by the artist. Custom made creations from 5 inches to four feet are available to suit any occasion or event. Whether the theme is sports related, professional, holiday or other, all creations share in common a whimsical look at the world through the eyes of the artist. Born’s creations, old and new, do not deviate from her concept that made the original 1997 creation a success, the use of colorful mardi gras beads. In 2002 the artist took her concept a step further by using the colorful beads as a hair type. Introducing the “illlusive” mardi gras mischief beadhead, a rare find for the 2002 season. In the new orleans area born’s creations will forever be remembered as touted by andre’ trevigne, new orleans queen of common sense & no. 1 talk radio personality, described in her own unique “nawllins’ way: “now these ain’t ya mama’s barbie dolls. These are what barbie would look like after spending a week on bourbon street. 10 years have passed since losing the mardi gras mischief gallery to hurricane katrina. During that time, only a handful of mischief creations have been made. Everything has a time and place and the time has finally arrived for me to once again create my whimsical mischief creations. 2015 is a good year to begin anew. Who knows where the new quest will lead. But be assured it will be whimsical, witty, fun filled and sure to bring smiles. Creations will be limited in number and each one original, dated, and signed. They will emerge as inspiration finds its way to my heart. “Let the mischief begin again”. See more information and like my mischief creations facebook page and view my video at. Born has designed dolls for new orleans house of blues, universal studios florida, mgm grand casinos, coca cola, licensed dolls for tabasco, gte, etc. Born’s creations have also taken residence in the us white house during the bush era and the famous new orleans garden district tour ogden house which houses over 70 of the artists creations including 5 ft arabella that greets visitors in the entry way of that historic home. Ogden house has been used in many movies and television series including anne rice’s interview with a vampire. This item is made of button collage and metal beads, mardi gras beads, glass beads, rooster feathers, italian leather, arashi shibori leather, tribal accents.